See more of my work on Venture Galleries

Jim Ainsworth
Campbell, Texas, United States
Jim is the author of eight novels, three memoirs and four business books. He made a covered wagon and horseback trip across Texas to retrace the journey his ancestors had made two generations earlier and wrote Biscuits Across the Brazos to chronicle the trip. He traveled the team roping circuit as an amateur and worked roundups on big ranches. Working beside real cowboys sent him back to writing. Using lessons he had learned from more than 10,000 client interviews over thirty years and memories from his rural Texas roots, Jim published five novels in his Follow the Rivers series and three in the Tee Jessup/Riverby series. He has also published three memoirs and story collections.He has been a Writers Digest International Book Contest Finalist.

Our website, www.jimainsworth.com has been updated to offer free S&P on orders $50 or more. We are also offering special pricing on the 2014 Books and the Follow the Rivers series of books, as well as a great deal if you buy all nine books in the collection.
If you have an order form and wish to order by mail, just complete the form without S&P (if over $50) and send it along with your check or credit card information to Jim Ainsworth — 2403 CR 4208 — Campbell, Texas 75422.
We have also made it as easy as possible to order online from the website. However, if you have a special situation that doesn’t fit the site, e-mail jim@jimainsworth.com explaining your needs. You will be sent an invoice online and you can pay by credit card using a secure connection.
If you have already placed an order and paid S&P and wish to add book(s) to qualify for free S&P, just send an e-mail explaining your situation. Any shipping charges already paid will be applied to the purchase of additional book(s) and free S&P will apply to the additional book(s).
Send questions to Jim at jim@jimainsworth.com or myself at vivian.freeman@yellowrosetype.com.
Thanks for your support of Jim’s writing.

ntxe-news gave us good coverage on the books and launch party. Also Front Porch News Texas. Thanks to both.

Posted by Jim Ainsworth at 9:18 AM No comments:

Me and Marion Shepherd


I think they were a matched pair of Belgian mares, but they might have been Percheron geldings. Seems that Marion owned a pair of each breed at one time or another. He used to drive them by Mother’s house on Dogtown Road when he was breaking them to a sled.

What I do remember is the night they bolted as we approached a deep creek. It might have been the squirrel that ran between their legs or the screech of that owl that flew over, but I think it was the noise of the wagon they thought was chasing them.

It was their first time to pull a wagon; it was dark, and they imagined the strange loud contraption behind them was in pursuit and about to run over them. The faster they ran, the faster it ran. We had pulled off the asphalt highway to cut down on the noise the wagon wheels made, but that left us with no barrier to the creek.

I was pretty confident they would stop when they saw the big drop-off, but I had to consider the consequences if they didn’t. The wagon would likely turn end over end and land on one or both of us, not to mention what the wreck would do to the horses. And all were prized possessions for my cousin.

Marion stood on the foot brake and pulled back on the reins with all his might. But the pull was a minor nuisance compared to the pair’s terror of the contraption chasing them.  They never slowed. Marion shouted through the wind. “Jump!”

I couldn’t believe my ears. The wagon was traveling as fast as panicked horses can run. I looked at the horses’ bobbing heads and pinned ears, at the fast approaching creek, and back at Marion. The expression on his face said he meant it.

He shouted through the din. “Go out the back. I’ll keep trying to stop ‘em or get ‘em back on the road until you’re off, then I’ll jump before we go in the creek.”

I looked at the fast-moving dirt and weeds as I lay on my belly and hung my legs out the back. I thought I might be able to hit the ground running and avoid falling if I could get up to speed quickly enough—a foolish notion. I decided to wait until the last minute to jump.

But the grass and dirt turned to asphalt as Marion turned one runaway’s head enough to bring the wagon back on the road. It leaned on two wheels as it left the ditch and loosened my tenuous grip on the wagon bed. Any choice about jumping was gone.
I slid along the pavement on my belly. The horses stopped just about the time I did. Marion stood on the spring seat and looked back at me. He later said I looked like a hobo thumbing a ride in the moonlight. The outer layer of skin was gone from my palms and little spots of blood appeared around embedded gravel and splinters from the wagon bed.

The leather was shredded from my new leather-covered belt buckle and my front belt loops were missing. The knees of my jeans were torn out and my shirt cuffs were strings of thread. My denim jacket protected the shirt snaps, but they were all undone. The toes of my boots had taken the worst of it, but all in all, I felt pretty good as I stood and found nothing broken.

It was a cool fall night, and I was happy to be able to walk, happy that the horses and Marion were unhurt. I got back in the wagon and we drove the horses to the barn without any more trouble.
Marion’s wife Pat was waiting at Aunt Hildred’s (Marion’s mother), and she scolded him. “You might have been hurt real bad.” He consoled her and winked at me as he told her there had been no real danger.

I must have been quite a sight with ragged jeans and shirt and the hide gone from my palms as I stood to leave. “I think he was just trying to get rid of me.” Pretty soon, we were all laughing.

A few days later, we drove those green-broke horses into town for a parade. We stopped at Chute 1, my western wear and tack store, put the store banner on the wagon, and rode in a big homecoming parade. It was biting cold and the wind got up just after the parade, but we drove them the seven or so miles back to Shiloh. We were chilled to the bone. Aunt Hildred’s coffee never tasted so good and we took a rare afternoon nap on the floor beside her stove.

Shep and I had many adventures like that. We took a mule-drawn covered wagon and five horses across Texas to prove our mettle to our fathers and grandfather who had made the same trip eighty years earlier. We participated in a roundup on a famous Texas ranch. Mostly though, we commiserated, laughed a lot, and shared our joys and miseries. We’re double cousins, you see, more like brothers. All our ancestors are the same. And we were great friends.

He called me Jimmy Horn and I followed the timeless and honorable Texas tradition of using his first and middle names—Marion Shepherd. Daddy and many others called him Shep. He was a man who attracted nicknames, fun names like Dabo, because he liked to laugh, tease, and tell funny stories. By the way, if he were here now, he could tell us the breed, sex and the names of those two runaway horses.

I stopped at his little tire shop the other day on the way into Cooper. I don’t recall the last time I bought tires anywhere else. I rolled down the window to better let the memories wash over me. I choked up a little, did a little salute. Then I heard his strong voice. “Go on now, Jim. Go on.” The tone was like a command, so like Marion, a man who said what he meant and meant what he said. I made a little salute and drove on into town.

After I finished my business in Cooper, I stopped again, tried to picture him sitting in that little office, surrounded by friends who dropped by every day to shoot the bull. I tried to see him in the back, wrestling with a tractor tire men half his age and twice his size would have trouble handling.

It all happened so fast. Seems like we found out he was sick one day and he was gone the next. It wasn’t that fast, of course, but we didn’t have time to get our arms around it. Course, no amount of time would have made us ready to let him go.

At his full-church funeral, I read a tribute from his family written by his youngest daughter, added a few words of my own.

I choked up again, did my little salute. This time, the voice was less stern, gentler. “It’s all right, Jim. Go on now. You have to go on.” 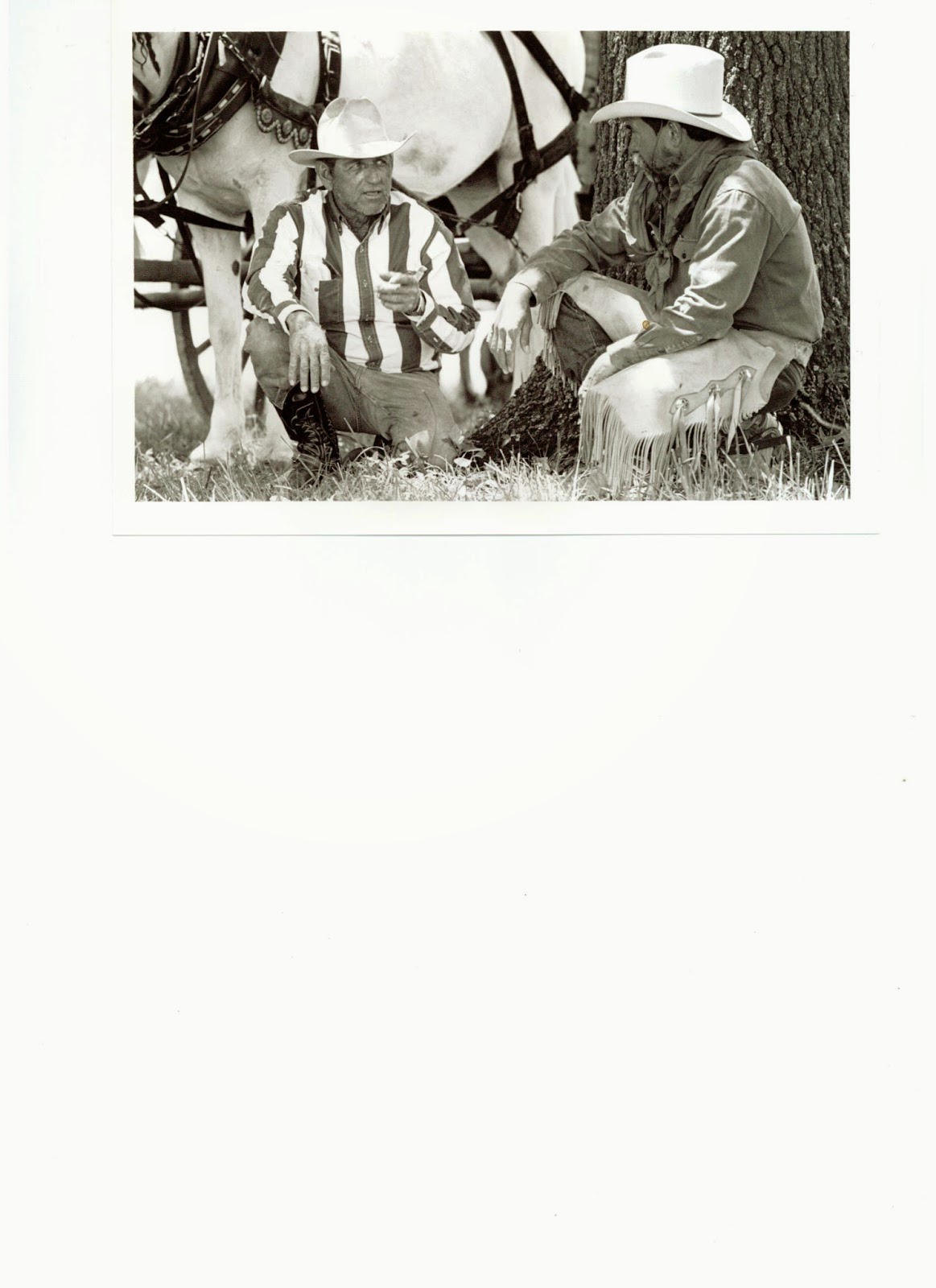